VPN Internet Speed Recommendation: How Much Internet Is Enough?

Our online data is increasingly vulnerable, and using VPNs is a good privacy protection strategy. But do VPNs affect your internet speed?

Using a VPN is a great way to protect your privacy while browsing the net. However, this convenient tool can hinder your surfing or streaming experience. That’s because no matter what VPN you choose, it’s bound to slow down your internet speed at least slightly.

To be able to discuss the internet speed requirements for using a VPN seamlessly, you’ll need to familiarize yourself with some of the basic terminology. These terms include internet speed, bandwidth, download speed, and upload speed.

Although some mistakenly use internet speed and bandwidth interchangeably, these two terms aren’t the same. The internet speed is the current speed at which the data is traveling when you’re using the internet.

The term internet bandwidth refers to the maximum amount of data that your network connection is capable of transferring in a certain period of time. This volume of information is calculated in megabits per second.

As opposed to the download speed, upload speed is the speed at which you send data. It’s typically slower than download speed because most internet connections are designed to maximize the latter as it’s more frequently used.

How to Check Your Internet Speed

Checking your internet speed is a straightforward task. All you need to do is pick one of the websites and apps that offer an internet speed test. There is an abundance of them, so you can try more than one, to be sure. Some of the most popular speed test providers include: 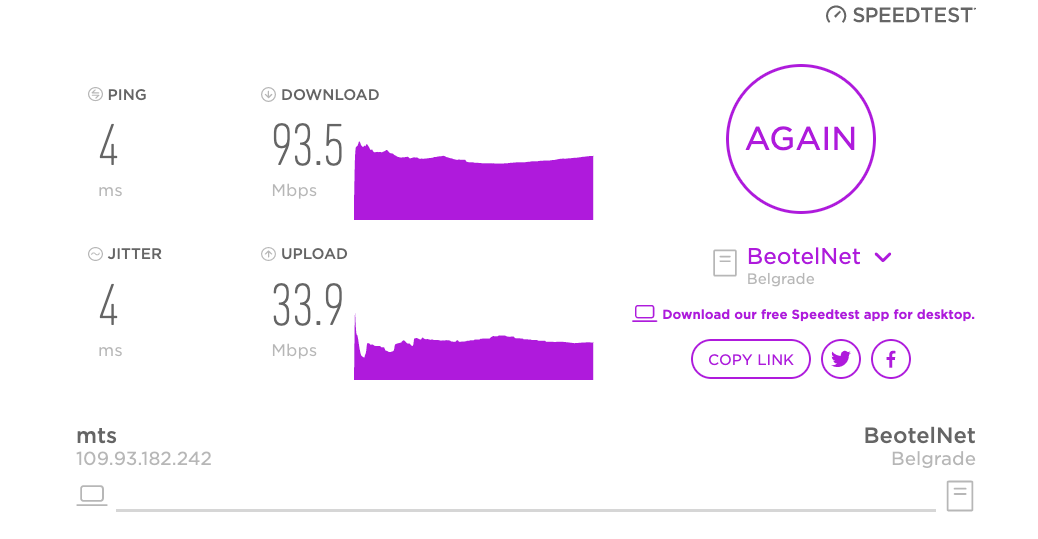 What Is the Optimal Internet Speed for Using a VPN?

The optimal internet speed when using a VPN varies depending on what you use the internet for and what kind of VPN you have. Premium VPNs are generally faster, but you can also opt for some of the quality free VPNs, including ProtonVPN, Hide.me, and PrivadoVPN.

In this section, we will focus on download speed. The minimum internet speed for VPN changes depending on the purpose the tool is being used for.

For simple web surfing, 10 - 12 Mbps internet speed is needed. However, this speed is for those who use the internet alone. If there are more individuals who regularly connect to the same network, then faster internet is necessary.

Internet speed needs for remote workers can be as low as 10 Mbps for individuals that use it for email, Slack, and internet research while using a VPN. Even those who use Zoom or other online conferencing applications will find this speed sufficient.

For gamers, the recommended internet speed is 20 - 30 Mbps, although this varies depending on the type of games they play.

According to some of the most recent statistics, over 56% of VPN users rely on this privacy tool to access Netflix each month. How fast your internet should be for streaming movies, TV shows, and other video content depends on the video resolution.

Netflix states that, in order to stream videos in HD, you need 5 Mpbs. However, when using a VPN, you should aim for a slightly higher speed.

When it comes to streaming video content in 4k resolution, the optimal internet speed ranges between 25 and 40 Mbps. This means that if you plan on using a VPN, your internet connection should be faster than 25 Mbps, and ideally, at least 40.

Recommendations for VPNs that Are Fast Enough

While some VPNs will significantly affect your internet speed, others are fast enough to sustain intense internet usage. Some of the top-notch VPNs for Mac and other devices include:

ExpressVPN is one of the best VPNs in the market. It has the split tunneling and kill switch features. Furthermore, its network of high-speed servers covers 94 countries. The downsides to this VPN include the price tag as it’s more expensive than many of its counterparts and that it offers only five simultaneous connections.

NordVPN is another VPN that allows you to browse at high speeds. Apart from that, this app uses the most advanced encryption, safeguarding your personal data. It has the automatic kill switch and split tunneling features, although the latter isn’t available on iOS. You may use this VPN on no more than six devices at the same time.

CyperGhostVPN can be used on seven devices simultaneously and has some neat features, such as the adblocker and anti-virus. Just like its counterparts, it offers split tunneling and has a kill switch. But this service is relatively expensive, and there are some reservations among consumers about the company’s reluctance to submit to an independent audit.

We started this article with the intention of answering that fundamental question: How much internet do I need when using a VPN? As you can now see, the answer depends on your browsing habits, that is, what you usually use the internet for. You need to make sure that you sign up for an internet plan according to your needs for a smooth VPN-boosted net-surfing experience.

VPN Servers and Server Locations - Why Are They a Factor When Choosing a VPN Provider?
Articles

Does a VPN Slow Down Your Internet Connection? The Great Cipher Holdup
FAQ
What is a good internet speed for VPN?

A good internet speed for simple web surfing is 10 Mbps. For gaming, you might need at least 20. Our guide outlines the speed requirements for a variety of internet uses.

It depends. If you’re using the VPN to browse the internet and work from home, 10-12 Mbps download speed is enough.

Can VPN increase the internet speed?

How much internet speed do I need for 4k streaming?

VPN internet speed recommendation for 4k streaming is at the very least 25 Mbps. For a better streaming experience, you should aim for at least 40 Mbps.