Learn How to Use ExpressVPN to Safely Share Torrent Files

In our ExpressVPN torrenting guide, we’ll introduce ExpressVPN - one of the most capable VPN providers on the market - and how you can use it to torrent. Alongside giants like NordVPN and CyberGhost, ExpressVPN provides a much-needed layer of privacy in an increasingly dangerous online world. VPNs encrypt your internet connection and hide your IP and location from intrusive websites, Orwellian governments, and malicious users.

Many users utilize a VPN when torrenting, as downloading copyrighted content can cause legal troubles and even lead to jail time. We’ll examine whether ExpressVPN is a good choice for torrenting and how to utilize it safely for that purpose.

Is ExpressVPN Good for Torrenting?

To use ExpressVPN for torrenting, we first need to know this provider is a solid choice for torrent users. The first thing you’re asking is probably: “Does ExpressVPN allow torrenting through its servers?” The answer is yes - you can freely download files with torrent clients through ExpressVPN servers.

Unlike most of its competitors, ExpressVPN doesn’t have specifically designated P2P servers you have to use to be able to download torrents. Instead, any server in its 3,000-strong network can do the trick. This makes ExpressVPN and torrenting a dream combo, as you’re not forced to choose from a limited selection of servers if you wish to torrent.

Another reason why ExpressVPN is excellent for VPN torrenting is due to the fact that all of its pricing plans come with unlimited bandwidth. If there were bandwidth caps in place, you’d be severely limited in how much you can actually download with this VPN within a specific time frame.

But is ExpressVPN safe for torrenting? After all, the prime reason to use ExpressVPN when torrenting is to preserve your privacy. Therefore, it’s crucial that the VPN provider keeps no logs or provides any identifiable user data to any institution or third party.

Luckily, ExpressVPN is headquartered in the British Virgin Islands, outside of the Fourteen Eyes zones, meaning it does not have to share any data with any country’s intelligence bureau.

Additionally, ExpressVPN keeps no logs, and the British Virgin Islands have very privacy-friendly data-retention laws. If you’re looking into how to torrent safely, ExpressVPN is certainly one way to go.

Now that we know ExpressVPN is both safe and suitable for torrenting, let’s look at how to use it. The good news is, ExpressVPN requires very little tech knowledge to set up. You just need to head over to its website, choose a pricing plan, and download the client for your OS.

Before you start downloading torrents, you’ll need a torrent client, too. ExpressVPN recommends using µTorrent, but any trusted client is fine, like BitTorrent or Vuze.

The setup for ExpressVPN torrenting is pretty simple: Fire up the VPN and connect to any server on the list. You’ll want to connect to the closest one to avoid speed losses. Before you start downloading torrents, ExpressVPN’s online privacy and security checker can tell you whether your IP is truly hidden.

We also recommended turning on the kill switch, which will automatically sever your connection to the internet to avoid privacy leaks if the VPN stops working. This also alleviates the need for the Bind-IP option on torrent clients themselves.

That’s all the torrent VPN setup you need to enjoy ExpressVPN torrenting freely. Since there are no bandwidth limits, you can download as much as you want. Using a VPN instead of a free proxy - which many torrent clients offer - is vastly superior, as proxies do not encrypt your connections and generally lack the advanced security and privacy features VPNs have.

If you don’t have ExpressVPN already, you may get an annual subscription with three months for free. The offer is risk-free since the company offers a 30-day money-back guarantee. 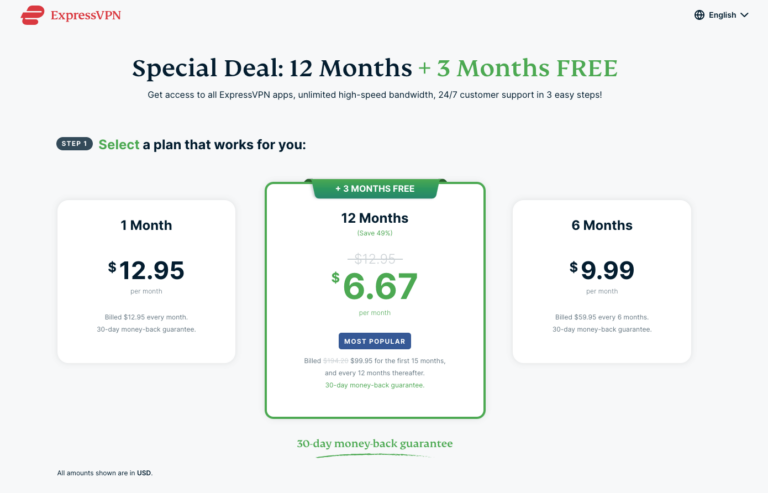 If you wish to download torrents to multiple devices, just install ExpressVPN on each of them, connect to a server and start torrenting through ExpressVPN.

ExpressVPN on Chrome: How To Add It and What It’s For
Guides

ExpressVPN and Hulu: How To Watch Content on the Streaming Giant
Guides

ExpressVPN and FireStick: The Winning Combination
FAQ
Can I get caught torrenting with a VPN?

In most cases, no. However, less-trustworthy VPNs without a no-logs policy might give your IP to the authorities.

Can I go to jail for torrenting?

Not for the act of downloading a torrent in itself. However, downloading copyrighted material through torrents is illegal and might lead to jail time.

How do I use ExpressVPN with BitTorrent?

Open ExpressVPN, connect to a server, and you’ll be free to download torrents via your torrent client of choice as usual.

Do you really need a VPN for torrenting?

While VPNs are far from mandatory for torrenting, they will protect your safety and privacy, which are otherwise left exposed.

Yes, torrenting is allowed on all of ExpressVPN’s servers, with no bandwidth limits.