One of the Best Backup Software Solutions Around

AOMEI is a reliable data backup solution for Windows users. The software can be used for backing up, restoring, and even cloning the entire hard disk or specific files and folders. In addition to giving users the option to encrypt their backups, AOMEI also supports a long list of storage devices. To find out more about this Hong Kong-based company and whether its products offer the type of insurance you need, read our AOMEI Backupper review.

The AOMEI Backupper comes in different shapes and sizes. There are several options tailored to both personal and business use. Depending on your needs, you can choose between a total of six different pricing plans.

AOMEI for home use is available in two separate packages: Standard and Professional. Both support all Windows PCs. The AOMEI Backupper Standard option is the free version of the software. Even though it includes manual and automated syncs and enables users to restore files, and clone their hard disk, some of the more advanced features are notably missing.

For instance, the AOMEI Backupper free version doesn’t include CD/DVD backup, and the software doesn’t automatically delete old backup images to save disk space. By upgrading to the Professional plan, users will get all that and more.

Aside from encrypted backups, the plan includes file filtering options and enables you to wipe your disk clean to prevent any sensitive data from being recovered. The price is just $49.95 with lifetime upgrades and one license.

AOMEI products are also designed to accommodate small and medium-sized businesses. AOMEI Backupper Workstation costs $59.99 with lifetime upgrades, unlimited technical support, and 256-bit encryption. You can backup and clone important business files and documents, as well as set incremental and differential backups. The AOMEI Backupper will review and detect changes to your files, saving them from the source locations to the destination location you choose.

AOMEI Backupper Server is another option that you can use for your business. It’s a powerful solution enabling continuous backups and instant recovery of your data. You can schedule backups daily, weekly, or monthly for the entire system, disk, partition, or files. The price is $199 for one license and lifetime upgrades. It’s safe to say that this product can compare to some of the most powerful cloud backup solutions.

The next two options are Technical and Technical Plus. Unlike the AOMEI Backupper Professional and Server versions, these two software options can be used to back up an unlimited number of PCs. With the latter version, you can back up an unlimited number of servers too. Since they come with powerful resources and many features, the price is a bit higher. Technical will set you back $499, while Technical Plus is $899 with lifetime upgrades.

One of the best things about this product is that you can get it with lifetime upgrades. That means you’re entitled to free upgrades every time AOMEI unveils a new version of the software. Moreover, this option also gives you unlimited access to the AOMEI Backupper support team.

It’s always a good idea to use antivirus software to protect your data from malware attacks. But to be fully protected, you need to go a step further by backing up your files and folders. AOMEI allows you to backup files and documents from your PC in a number of ways. Regardless of the package you choose, you’ll be able to back up, sync, recover, and clone your data.

Users can also manage their hard disks with help from the AOMEI Partition Assistant, which fixes any disk space issues and re-partitions the hard drive. Moreover, you can choose to exclude some files from backups or set automated removal of old backup images to save disk space.

During our AOMEI Backupper review, we tested out the AOMEI sync features, which tend to be some of the more desirable data protection tools. With AOMEI, you can easily schedule daily, weekly, or monthly syncs or enable the real-time sync option. This way, any changes made to your files on one device are instantly synced from the source directory to the destination directory. Although iDrive sync features work similarly to those of AOMEI, there is no option to set weekly or monthly updates. 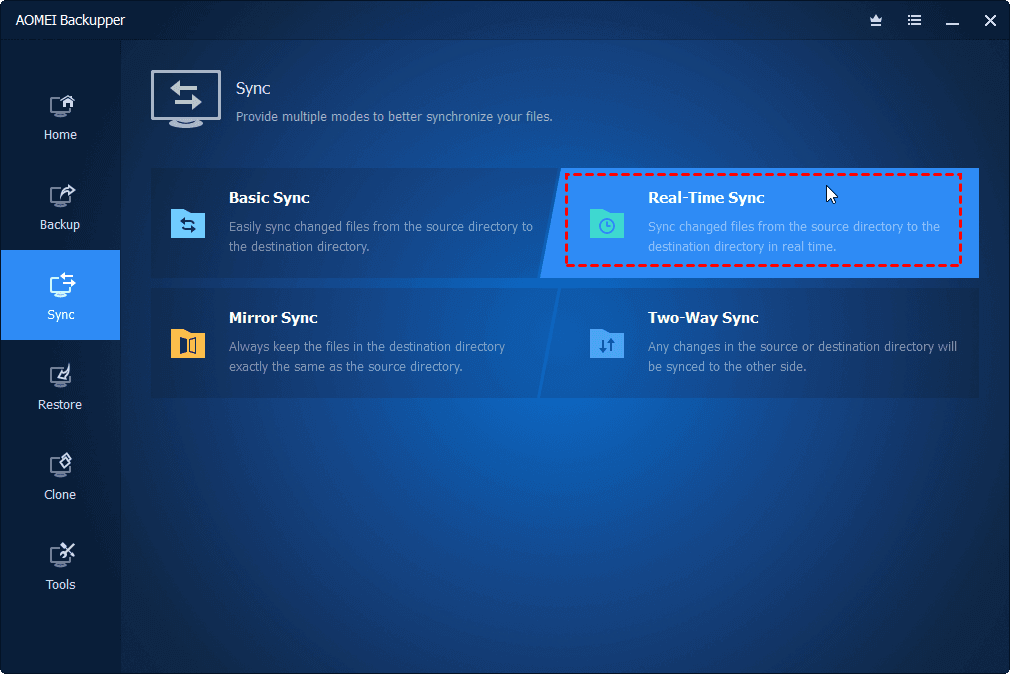 While backup and sync features are something that you can expect to get with all popular cloud backup solutions, an option to clone your disk is not always available. Online AOMEI Backupper reviews only serve to underscore the popularity of the disk clone feature among users. This allows users to copy all of the data on one disk, including HDD, SSD, or a USB drive to another disk.

Moreover, you can clone a partition for different files to another partition or clone system-related partitions. It’s a very useful feature when you run out of disk memory and you need to replace your old hard disk with a new one. With the AOMEI cloning software option, you can move everything you want to the selected disk with just a few simple clicks.

Here are the things that AOMEI can clone:

AOMEI has an easy-to-use and clear interface with transparently displayed features and tools. As such, AOMEI is the perfect solution for less tech-savvy users. Even if you never used similar software, you’ll quickly figure out how AOMEI works.

The AOMEI Backupper download process is equally straightforward and can be completed directly from the company’s website. The software is available for Windows 10, 8.1/8, 7, Vista, and XP. You can also backup files from your iPhone and iPad with AOMEI MBackupper. Unfortunately, there’s no Mac version of the software.

We tested the software’s main features: backup, disk clone, and restoration tools. Overall, we were really satisfied with the backup speed since it’s faster than some of the alternative software options. Restoring data is even faster, with more than 500GB taking around four hours.

In order to deliver the best possible support to its customers, AOMEI has a team of engineers standing by to assist you at any time. The professional service would be even better if there were additional channels of communication other than email. Unfortunately, AOMEI doesn’t offer phone or live chat support.

On the plus side, the AOMEI website is packed with dozens of articles and tutorials that tell you how to set up and use the software. The articles are especially helpful in explaining the differences between the software’s many features and simplifying the AOMEI disk backup vs system backup showdown for the less tech-savvy users.

The site is available in several languages, including English, French, Italian, Spanish, and Chinese. There is also a website forum where you can post your questions and start discussions on different topics. The company has Facebook, Twitter, and Youtube channels that you can use as another useful source of information as well as a channel of communication with the support team.

How Has AOMEI Changed Over Time?

Although we do think AOMEI is one of the best backup solutions for Windows users, there’s always room for improvement. During our AOMEI review, there wasn’t much in the way of news about updates, but we did come across information about the AOMEI Backupper changelogs. The two latest versions of this software, Version 6.6.0 and Version 6.6.1, include:

How Does AOMEI Compare to Other BackUp Services?

Our AOMEI Backupper professional review wouldn’t be complete without comparing the software to similar products. Two of AOMEI’s main competitors are EaseUS and Acronis. Although all three products have free versions, they don’t have the same features. There’s also some notable distinctions between their paid plans as some offer more flexibility and more options to choose from.

Ease of use is another important area of comparison, especially for users who don’t have much in the way of technical experience and wish to have an intuitive user-friendly solution.

There are a few key differences between AOMEI and EaseUS. The first and most obvious one is that EaseUS is available for Mac, while AOMEI isn’t. Both solutions offer a free tier, but there are some differences in the list of available features. The AOMEI free version includes manual and automated syncs and allows users to clone their hard disk and restore files.

On the other hand, the free tier from EaseUS enables users to locate their lost files but doesn’t actually recover them. So, unless you sign up for one of the paid plans, you’ll be more limited with EaseUS.

Another competitor that we need to mention is Acronis True Image. When it comes to pricing, AOMEI’s free version is hard to compete with. Acronis offers similar backup features, but the price starts at $49.99. In terms of use, AOMEI Backupper is much easier to set up and use, and many online reviews confirm that small and medium-sized businesses prefer AOMEI.

Although there are many similar backup products on the market, AOMEI is one of the best options that you can get your hands on thanks to the software’s many features and affordability. Our AOMEI Backupper Standard review outlines some of the perks of signing up for the free version, which includes manual and automated syncs, file restoration, and hard drive cloning options.

Upgrading to some of the paid plans opens the door to more advanced features, making this the perfect choice for both individuals and businesses. It’s also simple to use, which means that AOMEI is great for beginners too. The only downside is that it’s not available for Mac users. The AOMEI backup software is designed only for Windows OS.

How To Clone a Hard Drive | DataProt Guide
VPN

How Does Antivirus Work?
FAQ
What is AOMEI Backupper?

AOMEI Backupper is software for backing up, restoring, and cloning Windows computers. AOMEI is based in Hong Kong, and the company has been offering solid backup support and protection for Windows users since 2010.

Yes, AOMEI is a fully secure software solution for Windows computers that gives users the ability to encrypt the backups of their files and folders.

Is AOMEI Backupper any good?

AOMEI Backupper is a really good choice for users who prefer simple yet functional backup software. It offers a wide range of backup, sync, clone, and restoration features that are easy to use even if you are a beginner. Read our AOMEI Backupper review to find more about this software.

How does AOMEI Backupper work?

The first thing you need to do is download AOMEI Backupper from the website. When you access the software dashboard, you’ll see that all features – backup, clone, restoration, and sync – are neatly organized, and you can begin using those features on your Windows PC.