What Is SSTP VPN Protocol?

Secure Tunneling for Your Windows PC

One can’t have enough security when browsing the internet these days. You’ll want several safety layers, so you’ll use IP masking through a VPN. This is where tunneling comes into play. Many different protocols are available today for data tunneling through a VPN, with SSTP standing out as one of the most secure choices.

But what is it, and how does it work? Do you even need it for regular VPN use, or is it a mandatory protocol? Read on to find out.

The Secure Socket Tunneling Protocol, or SSTP for short, is a protocol created and developed by Microsoft. The tech giant from Redmond launched this protocol alongside its Windows Vista operating system as a replacement for the PPTP protocol. While pretty powerful, PPTP’s encryption is still hackable and also detectable by content providers. For example, if your VPN provider uses PPTP, services like Netflix could easily block you from accessing content available outside of your region.

Since it has replaced PPTP in Microsoft products, the SSTP VPN protocol has been present in all versions of the Windows OS, including the recently launched Windows 11. You can see it in your OS’s process manager as an SstpSvc.dll file. The technology is based on SSL/TLS certificates, encrypted data, and secure keys. It uses the same port (port 443) as SSL/TLS and can surpass the limitations of traditional firewalls, like problematic port forwarding.

How Does SSTP Work?

Your VPN app needs to pass the bandwidth through some tunnels to properly encrypt it, thus ensuring your security when you’re online. This is why it needs a tunneling protocol to create a secure connection between the client app and VPN server.

In the case of SSTP, a VPN app will transport traffic under a Point-to-Point Protocol (PPP) with an added layer of SSL/TLS protection. This ensures data integrity and encryption for all the traffic that occurs while the VPN connection remains active. Additionally, this protocol requires server authentication whenever establishing a connection and, optionally, going through the same process on the client side.

This VPN protocol has proven to be one of the more secure ones. As previously mentioned, the SSTP port is 443, which also matches HTTPS, meaning they share the same level of security and encryption. To ensure this, the network will use so-called certificates: Encryption requests that travel between two endpoints.

The reason SSTP is so secure lies in its SSL-reliant protocol. Specifically, its latest 3.0 version, which offers the highest level of security thanks to 256-bit AES encryption. Cryptography experts hold AES-256 in high regard; despite some speed issues, it doesn’t hinder protocol performance in a significant way.

Another critical piece of the puzzle is the aforementioned port 443. The traffic going through it will always show up as HTTPS. This makes it nigh-impossible to detect, and in turn, your connection won’t get blocked. Perfect for bypassing geoblocking, local censorship, and regaining access to the global internet.

Lastly, Microsoft owning this protocol means more than just having it backed by a large tech company. Every new Windows installation is equipped with this technology, and setting up SSTP ports is quick and easy. Microsoft keeps the protocol fresh with regular system updates and support, improving the security tenfold. Unfortunately, this means it’s kind of complicated to set up on Linux and macOS, but not impossible.

Disadvantages of the SSTP VPN Protocol

So far, we’ve talked about all the advantages of using this protocol over others. While it is an excellent piece of tech, like any protocol, it’s not without flaws. Here are some of the things you need to be aware of if you decide to employ SSTP encryption on your internet connection:

To reiterate, this is Microsoft's proprietary protocol. While the corporation keeps the protocol up to date and secure, many people simply don’t trust Microsoft or are wary of Microsoft’s previous collaborations with the NSA. The tech giant was very open to providing access to encrypted messages during various investigations and is even a member of the PRISM surveillance program. As cyber security experts would say, if you trust Microsoft hasn’t tampered with SSTP, you can trust the protocol itself.

This protocol isn’t enabled by default, even if your VPN provider offers it. Now, if the VPN client has more detailed settings than just selecting where to connect, you’ll probably find the option of choosing between encryption types. Just find the protocol on that list, confirm the selection, and you’ll be ready to go.

In case there’s no such option, or you’d like to use the SSTP VPN client integrated into your Windows installation, you’ll have to tinker a bit. First up, open the Windows Settings menu, either by clicking through the Start menu, or pressing the “Windows + I” shortcut on your keyboard.

From there, select Network & Internet, then choose VPN from the sidebar. Finally, click on the Add VPN connection button. 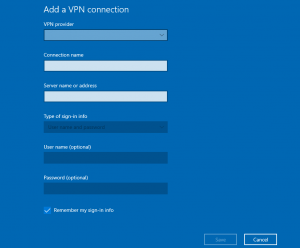 Here, you can set things up according to the settings your SSTP VPN provider gave you. Make sure to check the “Remember my sign-in info” box, so you won’t have to reconfigure the connection after reboot, and then hit Save for the settings to take effect. It’s highly recommended to enable these settings if you’re on a laptop and whenever you’re connecting to a public Wi-Fi network.

This is probably the most common comparison of protocols since PPTP was supposed to go out of fashion when Microsoft introduced its new network protocol. However, point-to-point tunneling is still needed, and it’s part of pretty much every VPN ever made. The previously spotty security of the protocol has seen improvements in recent years, although it still can’t match the level SSTP VPN providers provide. That being said, PPTP is significantly more open and easier to implement, so you can use it on all operating systems, desktop or smartphone alike.

OpenVPN is another popular standard when it comes to data-tunnel options. It’s slightly newer than other protocols used by VPN providers, but at the same time, it’s highly regarded as one of the most secure protocols around. Just like the secure socket tunneling protocol service, OpenVPN employs SSL 3.0 to encrypt data, masks traffic to look like an HTTPS connection, and uses AES encryption, albeit 128-bit instead of 256-bit. Most importantly, it’s completely open-source, meaning everyone can implement it without having to pay for a license. This also makes OpenVPN platform-agnostic. Its only downside is that it’s more complicated to set up than SSTP and PPTP.

Layer 2 Tunneling Protocol over IPSec, or L2TP/IPSec for short, is encryption technology that combines the best parts of PPTP and Layer 2 Forwarding. Developed and published by Cisco in 2000, this technology uses PPP at its base and then wraps additional layers of data protection around it. For encryption, it uses powerful AES, and users can choose between 128-bit, 192-bit, and 256-bit blocks. It then sends data over UDP port 500, one of the most common VPN ports that both firewalls and various services block. Comparing SSTP vs. IPSec, it’s clear that the former is the better choice for anonymity, while the latter is a good option for multi-platform solutions that require data authentication. They’re equal when it comes to security, though.

There’s a reason ExpressVPN has been one of our favorites for years: It’s affordable, fast, and very reliable. It also offers quite a set of features on almost every platform imaginable. Whether you’re on a PC, Mac, laptop, or smartphone, ExpressVPN will work its magic and can even be installed on the router. It’s also one of the best SSTP providers, with over 3,000 global servers - ideal for accessing geo-restricted content.

The name says it all: With IPVanish, you’ll be able to set up a secure connection to hide your IP in seconds. This provider offers several protocols and a vast network of servers in 75 locations. The SSTP VPN speed is great, as well as all of its security features, including (but not limited to) DNS leak protection, a kill switch, and traffic scrambling. Since it also comes with a zero-log policy, IPVanish is easy to recommend.

When it comes to sheer server network size, nobody does it like PureVPN. This SSTP provider offers all popular protocols across over 140 countries with its 6,500-strong server network. It’s also one of the most affordable services, starting at just under $3 a month - a massive bargain in the competitive VPN world. Granted, it’s a bit more advanced, so you’ll need to know a thing or two about setting up a VPN to use this service.

This brings us to the end of the story about this great, although not yet super-popular, protocol. Hopefully, we’ve answered “What is SSTP VPN?” noted its benefits and disadvantages, and offered a few examples of excellent services that support this protocol. If you’re a Windows user, this is the protocol you’ll want to use for your network and home PC.

What Is the Deep Web? - All You Need To Know
Articles

What Is the Dark Web? Myths and Facts About the Hidden Internet
Articles

What Is Windows Firewall and How Do You Turn It Off?
FAQ
How secure is SSTP VPN?

SSTP is one of the most secure VPN protocols. The connection uses AES-256 encryption on top of port 443 (which masks traffic), so data packets cannot be intercepted.

What is SSTP used for?

This protocol is used to secure internet connections. It is a virtual private network tunnel based on SSL/TLS technology, allowing for data-packet masking and higher protection than traditional connections.

How do I connect to SSTP VPN?

You’ll need a Windows machine and a VPN that supports this protocol. Luckily, the default Windows VPN already includes it. When setting up the connection, you need to enable the secure protocol type, making the VPN connect through it.

Is OpenVPN an SSTP?

No, even though they use similar encryption. These are different protocols you can use for data tunneling. The former is open-source, thus compatible with any operating system, while the latter is exclusive to Windows OS