How To Use NordVPN for Hulu and Watch Your Favorite Shows

We all love to binge-watch our favorite TV shows and movies, but problems can arise when the show is region-locked by TV networks and licensing companies. Thankfully, when all else fails, we can turn to a VPN for assistance. Today, we’ll take a look at how NordVPN and Hulu work together.

Hulu is a video streaming platform owned by the US-based Walt Disney Company. It’s known for its high-quality content, but also unfortunately for Hulu blocking VPNs. Hulu doesn’t just region-lock its content; it also keeps track of IP addresses used by VPN programs. That makes it highly efficient when it comes to blocking free VPNs, which have a limited number of servers and options.

To avoid being region-locked by Hulu, you have two options: move to another country (not likely!) or buy good VPN software.

Does NordVPN Work With Hulu?

NordVPN can be installed on devices that use Android, Windows, macOS, iOS, or Linux. Even though it can be used on cell phones, you won’t be able to use it to watch Hulu as long as the geolocation tracker is on, so don’t forget to turn it off if possible.

If you use any other device without a geolocation tracker, you shouldn’t have any problems using NordVPN for Hulu following our guide and troubleshooting steps.

It’s important to note that using a VPN to watch streaming services isn’t illegal, but using a VPN in general can be illegal in certain countries. Please check with the local authorities before you decide to get a VPN.

Why Use NordVPN for Hulu?

The only way to experience Hulu to its fullest is to trick it into believing that you are accessing it from the USA or Japan. When you live on another continent, that can be pretty tricky. So the only way is to use a VPN.

Free VPNs usually offer only a couple of servers to choose from, and their speed is less than adequate for fully enjoying the content available on a streaming site. Due to their limited numbers of servers, it’s easy for Hulu to track them down and block them, therefore blocking you completely from the website’s content.

NordVPN offers almost 2,000 servers in the US and 80 in Japan alone, and it has 5,473 servers worldwide. If any of the servers get detected or overloaded, it’s easy to just switch to a new one and continue watching. Overall, NordVPN is one of the best VPNs to use for accessing Hulu outside of America and Japan. But that isn’t all.

The speeds offered by free VPNs can be pretty limited due to their overburdened servers, which causes additional issues. After all, there is a minimum speed for Hulu to work properly.

Recommended speeds for watching Hulu are:

NordVPN is one of the fastest VPNs out there. It uses the NordLynx protocol to deliver a high-speed connection without any drops in stability or endangering your privacy.

Since Hulu is always on the lookout for shared IP addresses, you can get a dedicated IP address from NordVPN. This further decreases the chance of your IP address being detected by Hulu and blocked. How To Watch Hulu with NordVPN

Watching Hulu with NordVPN is simple and can be summarized in four easy steps.

Hulu Not Working with NordVPN - Troubleshooting

It’s easy to connect to Hulu with a VPN, but sometimes some kinks need to be ironed out. This next section will focus on sorting out any potential issues.

Sometimes, the browser you use will have your original IP address stored in its cached files. As long as Hulu can detect it, you won’t be able to access region-locked content.

Every browser has an option for clearing the stored cache. We’ll cover the two most used browsers: Google Chrome and Mozilla Firefox.

Clearing the cache is the first thing you should do before connecting to Hulu, or whenever you have a problem with any website.

Open up Google Chrome and press control + shift + delete to open the Clear browsing data section. Alternatively, you can just enter chrome://settings/clearBrowserData into the address bar.

Select the Advanced tab in the new window and change the time range to All time. Check boxes next to: Cookies and other site data and Cached images and files. You can uncheck all the other boxes. Press Clear data, then you’re done. 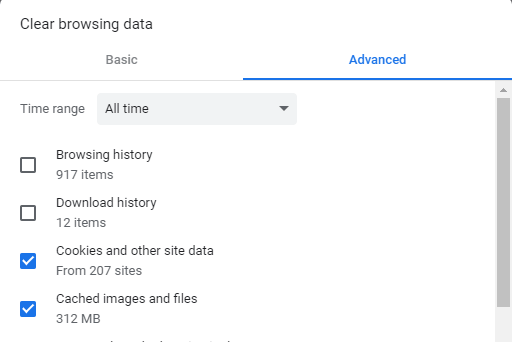 Firefox and Chrome use the same shortcut. Press control + shift + delete when you’re in Firefox. In the pop-up window, select Everything from the Time range to clear menu. Under History, check Cookies and Cache, then press OK. 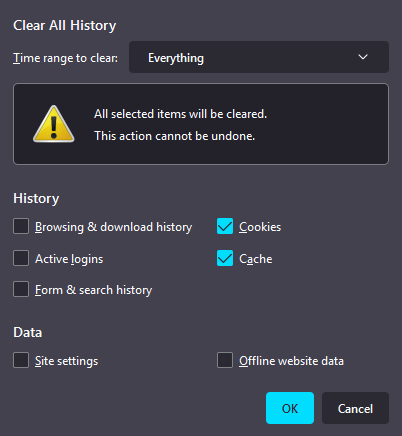 If Hulu is still not working with NordVPN, you can also try to flush your DNS, which will clear any IP addresses or other DNS records from your machine cache.

Use a Different VPN Server

Because Hulu blacklists IP addresses when it detects that they belong to a VPN, you may have to change your server if it stops working. Luckily, changing servers is easy when you use NordVPN for Hulu.

Close the Hulu app or tab and clear your cached files. If you’re unsure how, please check the previous troubleshooting step. Bring up the NordVPN app, then in the search tab enter United States. You can double-click on it and NordVPN will connect you to the fastest server that’s currently available. Alternatively, you can select the three dots and pick the server you want to use. Go to Hulu and test out your new server.

NordVPN, like most other VPN providers, is proud of its security features and has a lot of built-in options to protect its users. However, these can sometimes create problems when you’re accessing Hulu with NordVPN.

NordVPN has a CyberSec feature that reroutes traffic through more secure DNS servers, which is excellent for security, making it easier for Hulu to identify and block IP addresses originating from such servers.

If you can’t access Hulu with NordVPN, try turning off the CyberSec feature; you can find it under the general tab.

When you use a VPN, you actively share the same IP address with other users who are on the same server, which can lead to a bad neighborhood effect. You don’t know what they’re doing, and their actions may lead to the IP address being blacklisted. Luckily, NordVPN has plenty of other servers for you to use, but this can become an issue.

To avoid such problems entirely, you can get a dedicated IP address that only you can use.

In our case, we’re only interested in using NordVPN for Hulu, so we need a dedicated IP from the US.

Obtaining a dedicated IP address from NordVPN is a bit pricey; it costs an additional $70 per year, and the process isn’t straightforward.

You’ll have to create an additional account, and when you go to buy a subscription plan, you need to use the coupon code: norddedicatedip. After you’ve bought it, you need to contact the support team to merge your two accounts into one. It’s not a straightforward process, but sometimes it’s worth the extra hassle.

If you can’t watch Hulu with VPN assistance, the problem could be with your ISP or even your country of residence banning VPN usage. For such issues, NordVPN can offer obfuscated servers to hide the fact that you are using a VPN.

Due to how the data packets are formatted, the ISP can easily see when you’re using a VPN. But if you use an obfuscated server, it changes how they look, therefore tricking any automated blocking system put in place by the IPS. It would require a manual check of your data packages for someone to figure out that you’re using a VPN.

To connect to NordVPN’s obfuscated server, you need to set up the OpenVPN protocol on your app. To do so, open Settings, go to the Auto-connect option, set Choose a VPN protocol and server automatically to Off, then change the VPN protocol to OpenVPN (TCP).

Next, go down to the Advanced option and turn on “Obfuscated servers”.

Now, when you go to Search, under Specialty servers you’ll have the Obfuscated servers option. Click on it to connect, then see if you can watch Hulu.

If All Else Fails

With the help of NordVPN, the Hulu region wall can be avoided with ease. But if for some reason Hulu doesn't work with NordVPN and you’ve tried all of the troubleshooting steps, you can always contact NordVPN’s excellent customer support team for assistance or consult one of the company’s online knowledge guides.

If for some reason you’re not satisfied with NordVPN, there are other VPNs that you can use to watch Hulu.

ExpressVPN offers fantastic security features and high speeds that are perfect for watching Hulu or other streaming platforms. It offers more than 3,000 servers located around the world. There aren’t any servers in China, but it works well from there anyway, which is something that very few VPNs can brag about.

The only real downside of ExpressVPN is that it’s more expensive than most of its competitors. That said, it does offer a 30-day money-back guarantee like NordVPN, so you can test it out and see if it suits your needs.

Both ExpressVPN and NordVPN offer an impressive number of servers, but they’re both overshadowed by the CyberGhost server network, which boasts more than 7,000 servers. This is something you should take into account when searching for the right VPN for Hulu or any other streaming service.

SurfShark doesn’t offer the same number of servers as CyberGhost, but it's on par with NordVPN. Most importantly, this company is known for its high-quality servers that regularly bypass geographical restrictions.

As far as we can see, Surfshark doesn’t use any different technologies. But perhaps not being as well known as the others helps it fly under Hulu’s radar.

What Are Obfuscated Servers, and Why Do You Need Them?
Guides

Free VPN for Hulu: Is It a Viable Option?
FAQ
Why does Hulu not work with NordVPN?

This can only happen if all the IP addresses used by NordVPN are identified and blocked by Hulu. Since the company has almost 2,000 servers, this is unlikely to happen. Try to clear the cache and switch to a different server.

Can Hulu be used with a VPN?

You can watch Hulu with a VPN to avoid geo-blocking. You can even use a VPN if you reside in the US and don’t need to trick the geo-blocking programs.

Does NordVPN work with Hulu?

We didn’t encounter any issues with NordVPN and Hulu during our testing, but we’ve seen reports of people who’ve had problems. That’s why we’ve included a helpful troubleshooting guide in our article.

Hulu can’t ban a VPN, but it can ban IP addresses used by VPN software.