Free VPN for Hulu: Is It a Viable Option?

You can watch Hulu with a VPN, but free VPNs have speed and data limitations that make them unusable.

Hulu is a streaming service known more for its efforts to block VPN connections than for its content. It’s getting to the point where avoiding Hulu’s regional blocking is the second most challenging feat after bypassing the great firewall of China.

There are a few reasons why you might want to use a VPN to access Hulu. Maybe you’re traveling or live outside of the US or Japan. There are a few ways to get around Hulu’s VPN blocks, but they’re not all created equal. In this article, we’ll show you the best free VPN for Hulu so you can watch your favorite shows from anywhere in the world.

The Best Free VPN for Hulu?

Let’s get one thing out of the way before we get to the meat and potatoes of the article. Yes, a free VPN can, in some cases, provide you with access to Hulu. Still, it’s not going to be reliable, and due to limitations placed on a free account, you won’t be able to enjoy the highest quality the Hulu network offers. If money isn't an issue, we definitely recommend going with one of the paid VPN options for your Hulu unblocking needs.

In most cases, a free VPN has a limited number of servers, and Hulu can easily track and block each server’s IP address. By default, VPNs lower your internet speed. A free VPN will not only reduce your speed, but it will also put a speed and data limit on your connection.

As per Hulu’s internet speed recommendation, you’ll need 3.0 Mbps to watch its streaming library, with 16.0 Mbps needed for 4K content. Most free VPNs are capped at 1.0 Mbps. So, do we have a reliable free VPN that works with Hulu? In a way, yes, but it’ll require creative use of the money-back guarantee of the following VPNs: ExpressVPN, Surfshark, NordVPN, Hotspot Shield, and CyberGhost VPN.

VPNs That Work With Hulu

If you’re looking for a VPN that will give you access to Hulu but don’t want to spend a dime, your best bet is to take advantage of these services’ money-back guarantees. Previously, they all offered free trial periods, but such services are now a thing of the past.

All the VPNs on our list are among the best VPNs in the industry and have a good track record of bypassing Hulu’s region locking algorithm, but they aren’t quite the same. Let’s learn more.

With its headquarters in the British Virgin Islands and over 3000 servers in 94 countries, ExpressVPN is one of the most popular VPN providers. It's also one of the best performers in unblocking geo-restricted content, and Hulu is no exception.

We already had the chance to review ExpressVPN with Hulu, and we were able to unblock and watch Hulu content without any issues. We didn’t experience any buffering or connection drops, which is always a good sign. ExpressVPN offers excellent security features, such as AES-256 encryption and a no-logs policy.

The monthly subscription costs $12.95 and includes a 30-day money-back guarantee, which is the foundation of our minor exploit. Keep in mind that you must have the funds available, and you will be billed. As long as you contact customer support to request your money back before the 30 days expire, you should be able to get the full amount back.

Surfshark is one of the newest VPN providers on the market. It’s also based in the British Virgin Islands, and it has a strong focus on security. It uses state-of-the-art security features, such as AES-256 encryption, a kill switch, and a no-logs policy.

We had previously reviewed Surfshark, but unlike Express VPN, we did not have the opportunity to test it extensively with Hulu. This is as good a moment as any.

We were able to use Surfshark to watch Hulu episodes almost without issue, with the key word being “almost.” For some reason, we only had a problem with the Boston server; everything else worked without issues. Luckily, Surfshark offers over 3,200 servers, so we resolved the issue instantly by moving to another server.

No luck with the Boston server.

The connection was stable, and we didn’t experience any buffering or connection drops. Surfshark is also one of the few VPN providers that can unblock Netflix US, so you know it’s good.

The monthly subscription costs $12.95, but you can get it for $2.49/mo if you’re willing to commit to two years. It also comes with a 30-day money-back guarantee, which is perfect for our purposes. It also has a seven-day free trial for Android, iOS, and macOS.

NordVPN is one of the most well-known VPN providers. It’s based in Panama and has over 5,600 servers across 60+ countries. NordVPN is renowned for its robust security features and frequent content creator promotion on YouTube.

We already had the chance to test how NordVPN and Hulu interact and found no issues. The connection was stable the whole time, and we didn’t experience any buffering or connection drops.

The monthly subscription for the NordVPN standard pack, which offers everything you may need, is  $11.99/month. More importantly, it comes with a 30-day money-back guarantee.

Hotspot Shield is a well-known VPN with offices in Ukraine and Russia. It has over 1,800 servers in 80+ countries. To the company’s credit, its VPN was utilized to circumvent government restrictions during the Arab Spring anti-government rallies.

So, was Hulu able to block this government-toppling piece of software? The answer is no. We could use a VPN to watch Hulu content and stream without any issues. The connection was stable the whole time, and we didn’t experience any buffering or connection drops.

The monthly subscription for Hotspot Shield’s monthly pack is $12.99. It offers a seven-day free trial and a 45-day money-back guarantee. This may be the best deal for what we are trying to do.

CyberGhost VPN is a Romania-based software with over 7,000 servers in 90+ countries. It is one of the most user-friendly VPNs, with easy-to-use apps and a one-click connect button. We already had the chance to review CyberGhost VPN and were pleased with its performance.

We had no trouble accessing Hulu’s geo-blocked material, even with the free plan. Their free plan is just a one-day trial, so if you can binge-watch the whole program in one day, go for it. If you prefer a saner approach, you can get their monthly plan for $12.99 and use a 45-day money-back guarantee once you’re done with the show. 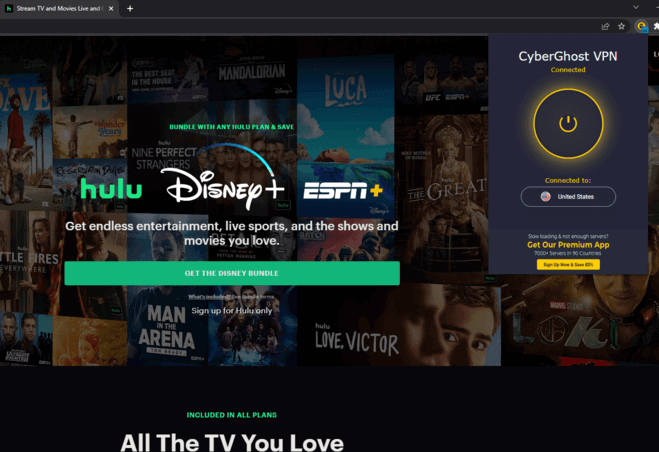 With over 7,000 servers, Hulu will have difficulty tracking them all down.

There are a couple of potential drawbacks to using a VPN to watch Hulu. The most significant one is that your internet connection will be slower due to several factors, including encryption, distance to the server, and server load. This can lead to buffering issues if you don’t have a fast internet connection.

Another potential downside is that not every VPN is compatible with every streaming service. If you’re using a free VPN, there’s a chance it might not work with the Hulu website. We recommend only using paid VPNs with a money-back guarantee to circumvent the problem.

Finally, the Hulu algorithm may change in the future, and your favorite VPN provider may be blocked. Luckily for us, most VPN companies consider it a challenge to be the first to break through to the other side, and for now, such problems can be remedied by switching servers.

If Hulu isn’t working, the issue isn’t always with the VPN provider. It can instead be caused by your browser, ISP, or even Hulu itself.

Can You Watch Hulu for Free?

Unfortunately, you can’t watch Hulu for free. Free VPNs are too limited to view Hulu without constant video buffering. Plus, you have to pay for Hulu, so you technically can’t watch it for free.

You may at least keep your costs to a minimum by using our simple workaround. However, be warned that VPN providers will not allow you to repeat the same trick over and over again. Fortunately, there are a lot of them, so you can change the provider every time you need to access Hulu from outside of the United States.

For the time being, make a nice cup of Yorkshire tea, relax in front of the TV, and enjoy knowing full well that you’ll be canceling your VPN subscription, and maybe Hulu too, at the end of the month. It’s not like they’re pumping out shows at an alarming pace!

The Best Thing About NordVPN? Netflix Is Yet to Catch It!
Guides

CyberGhost and Hulu: How To Use the Popular VPN To Watch Your Favorite Shows
FAQ
Is there a free VPN that works with Hulu?

The issue with free VPN for the Hulu platform isn’t that it doesn’t work. Different providers of free VPNs come with speed and data limitations that make them unusable for streaming, forcing you to pay for a premium service.

Can you trick the Hulu location?

As long as you don’t attempt to watch Hulu from your cell phone device, you should be OK with a little help from a VPN provider. Most cell phones will reveal your exact whereabouts, even with the VPN switched on.

How do I bypass the Hulu VPN block?

Try switching to a different VPN server, but first, clear your browser’s cookies, flush your DNS, and then try again.