What Is Windows Firewall and How Do You Turn It Off?

Windows Firewall serves as a barrier between your PC and the internet, vigilantly protecting the former from cybercriminals and malware found on the latter.

The information age began in the mid-20th century, heralding a shift from traditional industry to an economy based on information technology (IT). But it wasn’t just the industry that benefited from the change. Today 63% of the world has access to the internet, with more people joining the world wide web each day.

Unfortunately, not all who join have honest intentions, and we aren’t talking about internet trolls, either. We are talking about cybercriminals, often known as hackers.

Microsoft created and developed the Windows Firewall to protect computers from such threats. But even today, many users aren’t aware of its existence or exact purpose. Today, we’ll explain a little about its inner workings and discuss how and why you would turn it off in some instances.

What is Windows Firewall?

As the name suggests, Windows Firewall is a firewall created by Microsoft and integrated into its operating system (OS). Like any other firewall, its purpose is to monitor network traffic for any potentially harmful data packets or attempts to infiltrate the local network.

It works by using a set of rules applied to both inbound and outbound traffic. The rules depend on a profile we set up for the network we are connected to. It can be:

Windows Firewall is set to trust known sources based on the profile rules and only asks for user input when required to do so by the profile setting.

There will be times when you’ll want to turn off Windows Firewall or allow specific programs to access the network. Both can be set in the firewall settings in Windows Defender settings in the Control Panel, but you can change them only if you are the PC administrator. We’ll go into more detail about this later in the article.

Initially known as the internet connection firewall, it was first released in 2001 with Windows the XP operating system. Thos Microsoft firewall was turned off by default due to concerns with backward compatibility, and the controls were buried in the network configuration screen, which many users never opened.

After the Blaster and Sasser worm attacks in 2003 and 2004, Microsoft fell under criticism that it was not actively protecting its customers from threats. The critics were unfounded because Microsoft had released patches before the attacks, addressing the remote procedure call (RPC) Windows service vulnerability exploited by the attackers. As often happens, though, many people neglected to update their systems.

In August 2004, Microsoft released Windows XP SP2 with a new and improved firewall, now called Windows Firewall, which was set to on by default. From then on, the company continued improving and developing it further.

How To Disable Windows Firewall

Windows Firewall should only be disabled if you have another firewall enabled. Having two working simultaneously on your PC will not add extra protection, as they will only interfere with one another. Hence, if you opt to go for another dedicated firewall solution, you should disable the Windows one to reduce strain on your device. That said, it’s possible to set two firewalls on the same network. 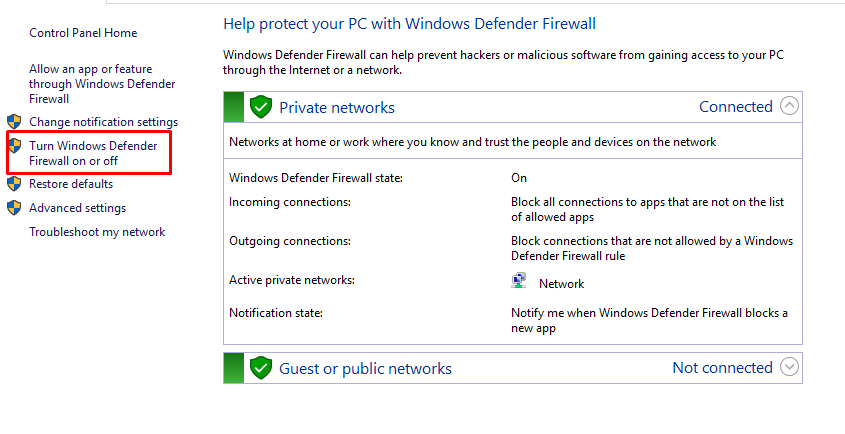 If you’ve blocked a program by mistake or want to set a rule manually, you’ll have to access the Windows Firewall with an advanced security panel. You can do it in the same window by clicking on the “Advanced Settings.” 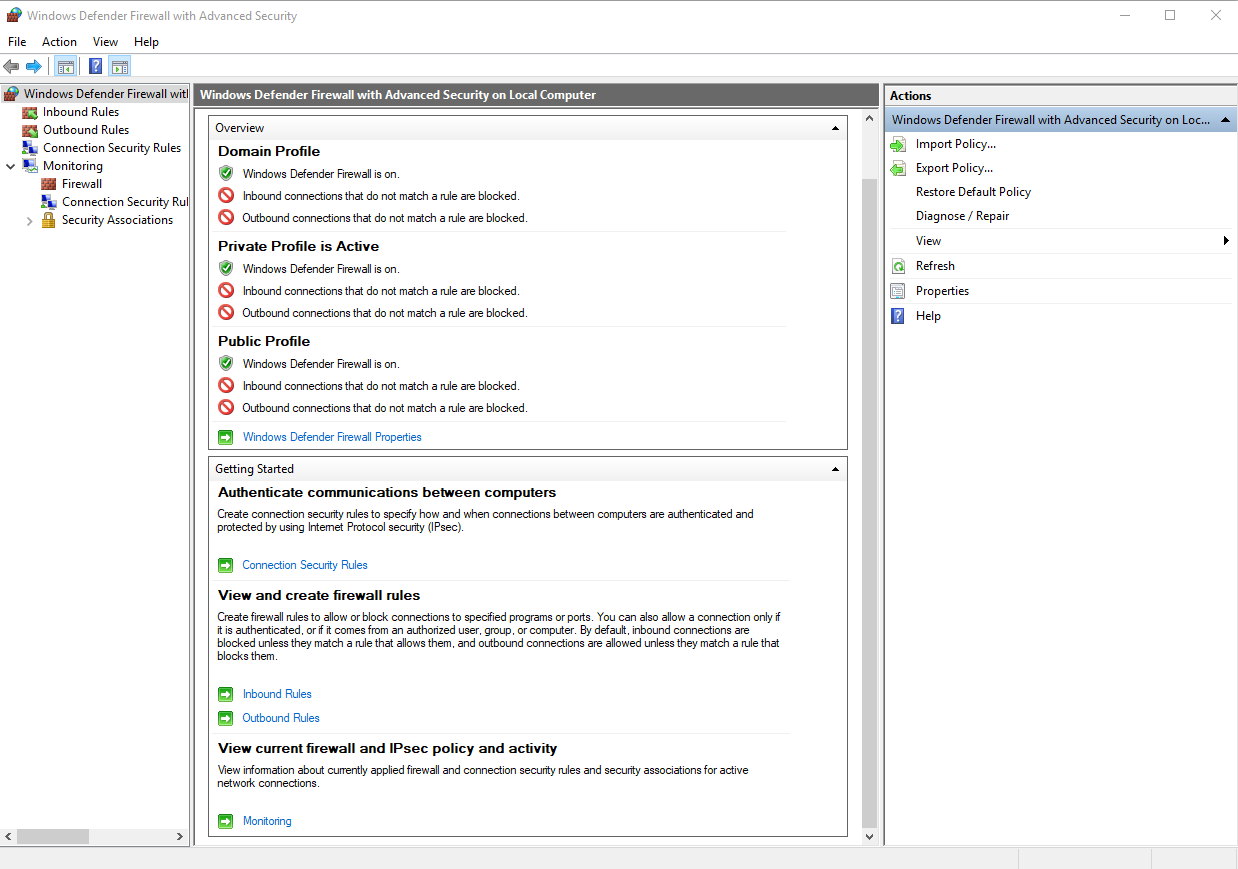 The new window will open, giving you complete control over all aspects of the Windows Firewall. If you want to modify an existing rule, find it under inbound or outbound rules. Right-click on it, and you can enable or disable it. For fine-tuning the rules, go to properties. 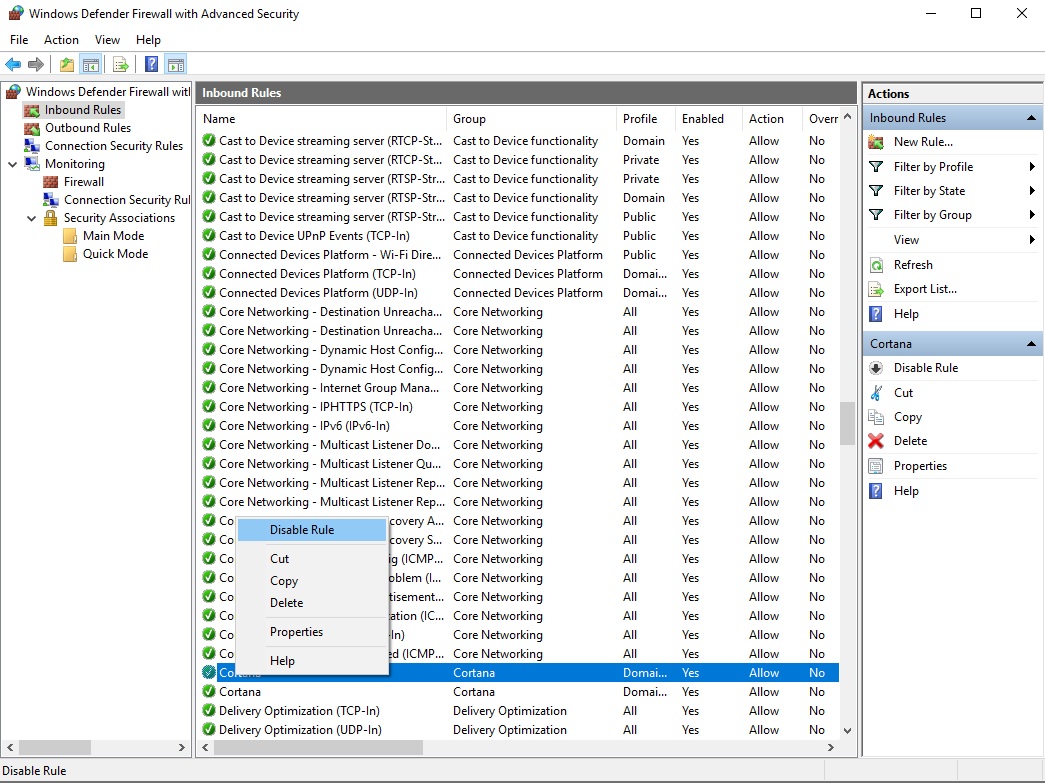 You can also create new rules here by selecting the appropriate category (inbound, outbound, or connection security rules) and either right-clicking on the empty spot and picking a new rule or clicking on the option from the action menu on the right.

If you are trying to determine the cause of the connection issue related to the Windows Firewall, you’ll have to enable Windows Firewall logs. This is done from the left panel of the main window by selecting “Windows Defender Firewall with Advanced Security,” right-clicking on it, selecting Properties, or clicking on Properties in the “Actions” sidebar. 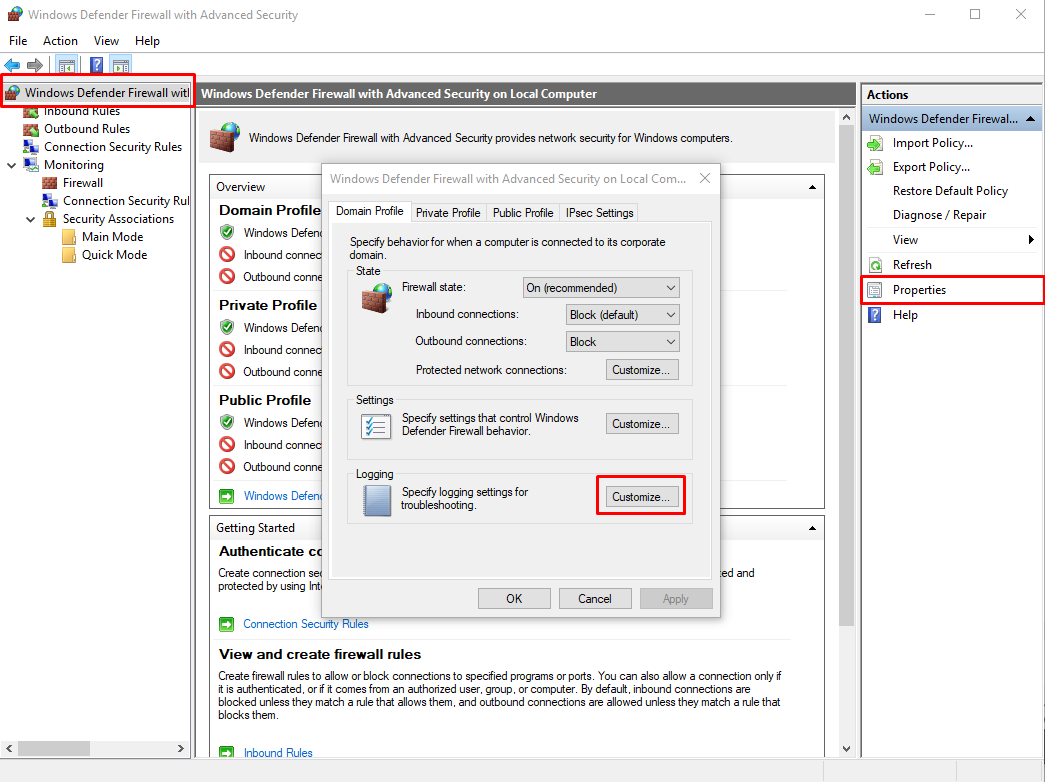 Under “Domain Profile,” you’ll see a menu called Logging, and from there, you can click on “Customize.” Here you can see where the logs are located. By default, the records are stored in %systemroot%\System32\LogFiles\Firewall. Systemroot is the location of your Windows folder, and the log file is named pfirewall.log.

Logging of successful connections and dropped packets are turned off by default, so we need to change these settings to Yes and save them. 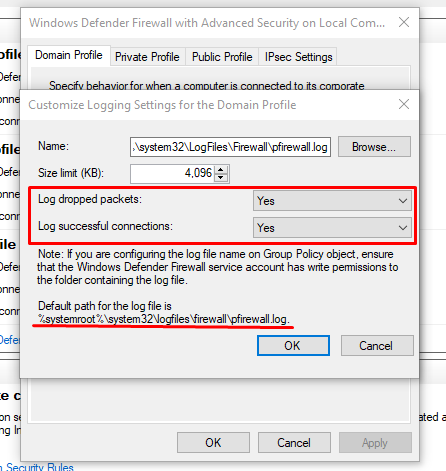 If all of this looks a bit too complicated or overwhelming, there are options on the market that can help you better manage your firewall settings or outright replace the default Windows app.

Binsoft, now part of Malwarebytes, created a Windows Firewall Control program that helps you better manage your Windows Firewall. It provides access to all of the Windows Firewall functions and settings located in one place, allowing users to manage their firewall easier and thus strengthen their online security. There’s only one problem: unlike the default Windows app, this one isn’t free.

You can always fully replace Windows Firewall with another program like Norton, which provides complete protection against cyber threats and not just the firewall. In our tests, we found Norton intuitive and easy to use, so it won’t be a hassle to use. Again, though, you’ll need to pay for it.

Like Norton, Kaspersky also offers a firewall as part of its complete protection, but at a slightly more affordable price. A free version is available, but its features are limited, and the firewall isn’t included. Still, if you plan to continue using Windows Firewall, it will further boost your security with excellent antivirus protection.

What Is a Firewall? A Short Guide
Statistics

How Does Antivirus Work?
FAQ
What Does a Firewall Do on Windows?

It protects the PC by monitoring and blocking unauthorized network traffic.

Should Windows Firewall Be On or Off?

Windows Firewall should be turned off only if you have another firewall enabled.