What Is the CryptoLocker Virus?

In recent years, cybersecurity has become a hot topic of conversation. With the increase in frequency and sophistication of cyber attacks, it’s more important than ever to be aware of the potential threats to your computer and how to protect yourself against them. One such threat is the CryptoLocker.

If you’ve never heard of the CryptoLocker virus, consider yourself lucky. This is a particularly nasty piece of malware known to encrypt users’ files and demand a ransom for the decryption key. In this blog post, we’ll discuss what CryptoLocker is, how it works, and how to remove it if you’re unfortunate enough to get your device infected.

Origin of the CryptoLocker Ransomware

The CryptoLocker is a type of ransomware that is used to extort money from victims by encrypting their files and demanding a ransom for the decryption code. Files are encrypted using an algorithm that only the attacker has access to and is very difficult to break, making it nearly impossible for victims to decrypt all the files without paying the ransom.

Once your files have been encrypted, you will receive a message from the attacker demanding a ransom (typically in Bitcoin) in exchange for the decryption key. The amount of the ransom varies depending on the attacker, but it is typically around $100. 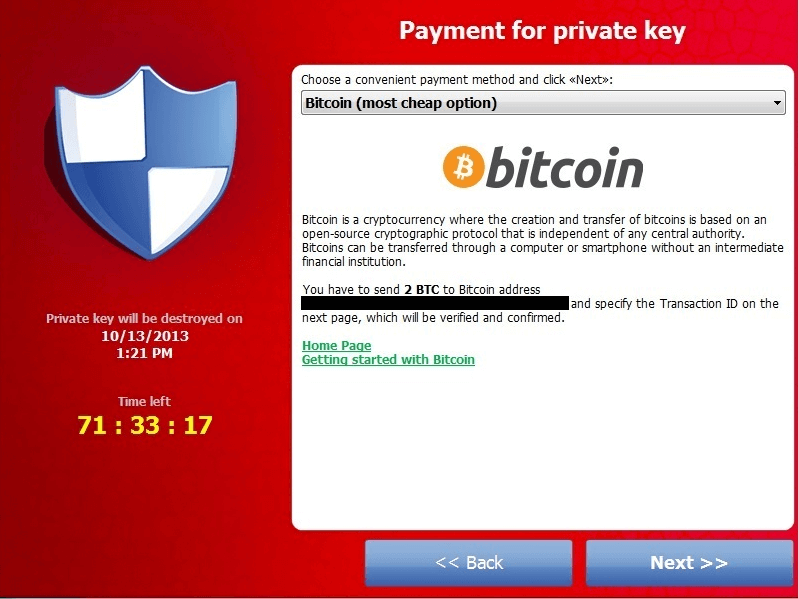 CryptoLocker malware first appeared at the end of 2013 and started gaining popularity during the first half of 2014. The malicious parties used a Trojan virus to target and infect computers running on Windows OS. Email attachments were another attack vector used by CryptoLocker, and were distributed by the Gameover ZeuS botnet.

Phishing is a type of cyber attack that relies on social engineering to trick users into infecting their computers with malware. Despite being one of the oldest and most well-known types of cyber attacks, it remains a serious threat and the main method of distributing CryptoLocker.

These attacks are constantly evolving. For example, attackers often impersonate a trusted brand or organization to increase their chances of fooling victims.

They may also use sophisticated methods to infect victims’ computers, such as creating fake websites that look identical to the real thing. As long as users remain vulnerable to these types of scams, there will be a method to distribute this kind of ransomware and malicious executable files.

How Does It Work?

Nowadays, you can typically get the CryptoLocker virus through malicious attachments in your email or by following unsolicited web links. Once it has infected a computer, the virus will scan the hard drive for certain types of documents (such as DOC, XLS, PDF, etc.).

Once the scan is complete, it encrypts files by using a strong encryption algorithm. It uses RSA public-key cryptography and stores private keys on servers used by malware. 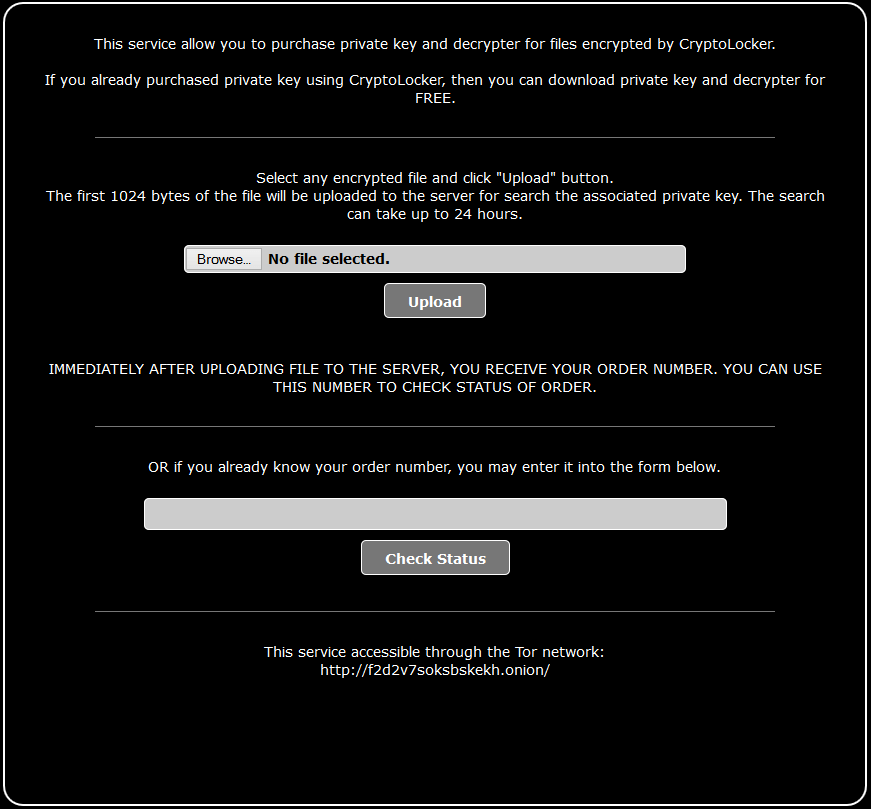 Once the files have been encrypted, the victim will see a message demanding a ransom in exchange for the private key that can decrypt files on your PC. CryptoLocker will inform you that you may lose encrypted files permanently if you don’t pay until the deadline passes. 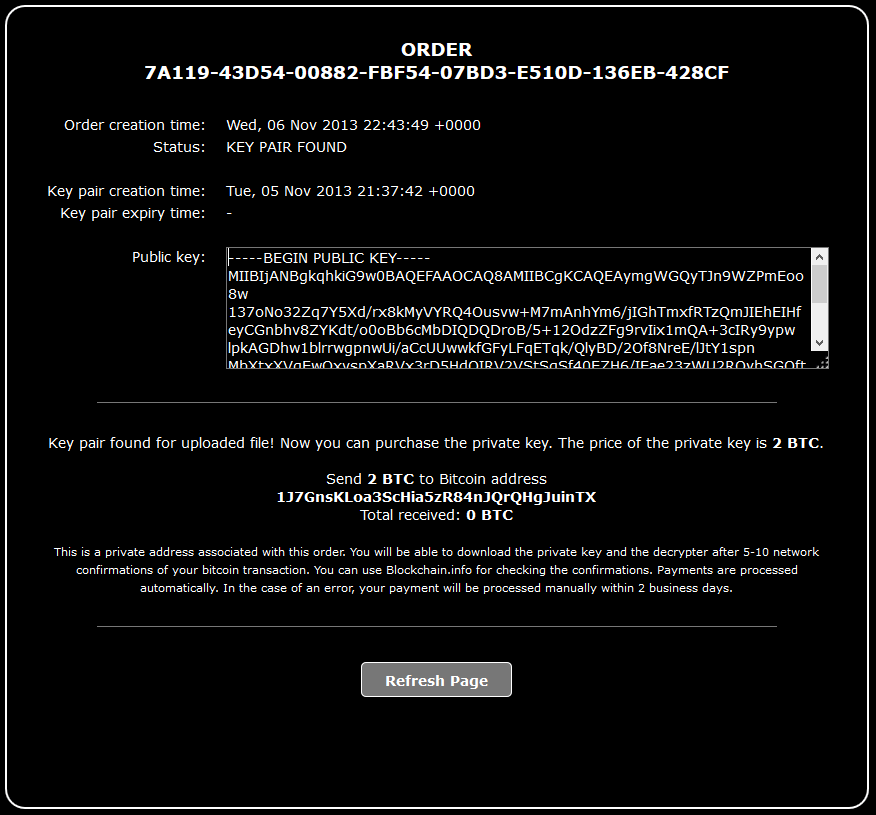 Result once the private key is found (Source: Dell SecureWorks)

Unfortunately, there is no fail-safe way to remove CryptoLocker’s encryption from an infected computer. There are some steps, however, that you can take in an attempt to remove the virus and at least try to decrypt your files on your own.

We suggest you start the process by running a trusted malware removal program like Malwarebytes or Astra. Some of the tried-and-true anti-malware programs on the market may get rid of the malware, but they won't get your files back.

How To Decrypt Files Encrypted by CryptoLocker Virus

You can try using a tool such as Emsisoft Decryptor, a suite of free ransomware decryption tools that may be able to restore your files for free.

Since CryptoLocker was first found in 2013, it’s likely that you’ll be able to find a way to get rid of the particular strain you’re dealing with. However, it’s possible that if you were infected by one of many clones of the virus with encryption that hasn’t been cracked yet, you wouldn’t be able to restore the affected files.

Keep in mind that if you can’t restore files as a result of an infection caused by a ransomware virus, such as CryptoLocker, you shouldn’t delete them. Most cybersecurity researchers make their results public, and users can recover encrypted data as new decryption keys are discovered.

Finally, if all else fails, paying the ransom may seem like a good idea. However, we do not recommend this as there is no guarantee that you will receive the decryption code even if you do pay.

How Can I Protect Myself Against It?

There are several things you can do to prevent CryptoLocker and other types of malware from ruining your day:

Using reputable cloud backup services is one of the most dependable ways to protect your files from ransomware like CryptoLocker. For a small monthly fee, you can have peace of mind that your most important files are safe.

The CryptoLocker is a nasty piece of malware that can cause severe damage to your computer, and it’s a threat to both individuals and businesses. Attackers can cause major disruption and financial loss if you’re not prepared.

If you think your device might have been infected, you should run a reputable anti-malware program and try to use a file decryptor tool as soon as possible.

That’s why it’s so important to know what the CryptoLocker is and how you can remove it from your system if needed. Take steps to protect yourself against such malicious threats by keeping your software up-to-date and being cautious about what links and attachments you click on.

Ransomware Statistics in 2022: From Random Barrages to Targeted Hits
Articles

What Is Ransomware? A Quick Guide
Antivirus

The Biggest Ransomware Attacks in History
FAQ
What does the CryptoLocker virus do?

Like other types of ransomware, CryptoLocker encrypts files on your computer so you can no longer access them. The attackers then demand a ransom in exchange for the decryption key that would allow you to regain access to your files.

What are the symptoms of the CryptoLocker virus?

The most common CryptoLocker symptoms are not being able to access certain files on your computer and receiving a ransom demand from the attackers.

CryptoLocker is far from safe. It's a type of ransomware that encrypts your files and locks you out of them unless you pay a ransom.

While it may seem like paying the ransom is the only way to get your files back, there is no guarantee that you will receive the decryption key after paying. In fact, there have been reports of people who have paid the ransom but never received the key.

How was the CryptoLocker virus stopped?

In 2014, Operation Tovar, a group of law enforcement agencies working together, shut down the Gameover ZeuS botnet. This led to the discovery and isolation of the CryptoLocker.

While the ransomware’s main source was shut down, it didn’t eliminate further distribution of the malicious code.